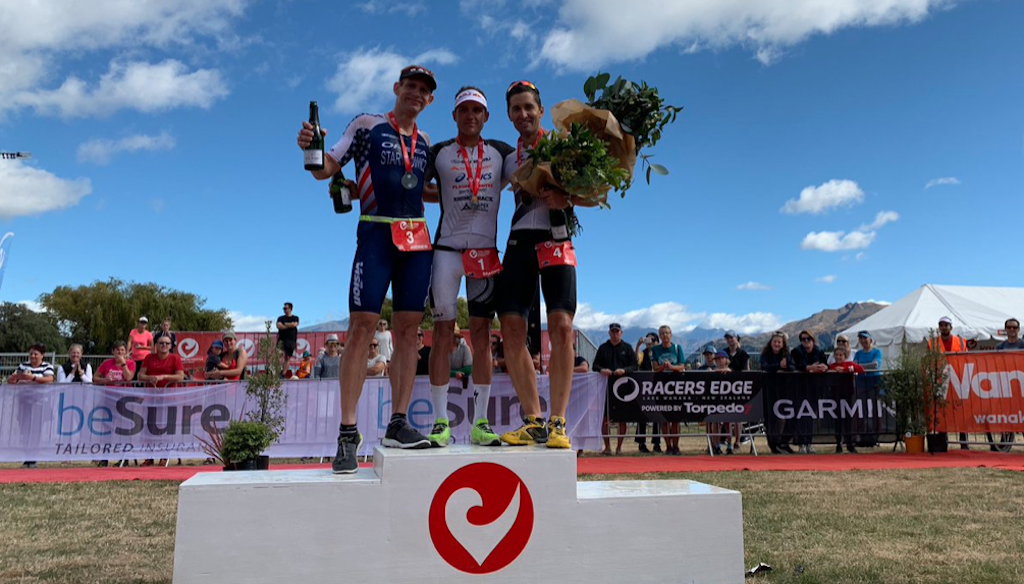 The Wanaka local came out of the water in second place to Christchurch’s Dylan McNeice only to be overtaken on the bike leg by American cycling powerhouse Andrew Starykowicz. Starykowicz who is the world record holder for the fastest bike split in a Long Distance Triathlon kept an impressive lead on the bike but was soon run down on the offroad run along the shores of Lake Wanaka. Australian Matt Burton who was 8th out of the water,put in an amazing bike leg passing all but Starykowicz. Currie was close on Burton’s tail into the second transition and passed the Aussie within the first two minutes of the run. Matt Burton held on for third place holding off a fast young kiwi professional Jack Moody.

“It wasn’t the best day, I didn’t feel that great but in the run I got into it and got the rhythm. I knew Starky would hurt so I kept it going. It is so awesome to win and a really good result,” said Currie. “Maybe a bit of pacing helped me as I felt comfortable till the end. So now just looking on to the future.”

Tauranga’s Hannah Wells has carried on showing impressive form in 2019 and shook the women’s field up by winning and holding off multiple Long Distance and Middle Distance Champions American Meredith Kessler and Brit Laura Siddall. This will be her second professional win and is certainly one to watch in the world of triathlon. Wells came out of the water in third place behind a swift Meredith Kessler and Australian Kerry Morris. Morris managed to overtake Kessler in the last 20km of the bike leg and looked strong coming out of the transition. Kessler and Wells worked well together running down Morris and passing her at the start of the outlet track 7km into the run. The front runners then played cat and mouse for the rest of the leg, with Kessler proving her strength on the hills but Wells fast legs giving her the eventual win by 1min 7 secs.

“It feels amazing,” said a thrilled Wells. “I mean it was super hard but I held it together. The swim was pretty good as I kept with Kerry (Morris) and it is always good to have company in the water. Then once we were on the bike I decided to play it conservatively on the way towards Treble Cone but Kerry decided to push forward but I stuck to my plan and hoped they would come back towards me which happened and set me up for the run. I didn’t want to go too hard on the Outlet Track as I know it can take it out of your legs and decided to tuck up behind Meredith (Kessler) and not do anything silly. On Gunn Road I had a tough spot where she got ten metres on me and I was on struggle street for sure and thought my day was done, but I had quicker downhill leg speed and managed to get a second wind and hold it till the finish. I am stoked.”

404 other individual athletes and 220 teams competed in the Challenge Wanaka Half and 100 in the Suzuki Aquabike National Championships held today on a sunny Wanaka Saturday with thousands of spectators coming out to cheer the athletes on.

The Suzuki Aquabike National Championships was won by Brendon Vesty, with Queenstown Adam Wilson in second and Paul Sell in Third. The women’s race was won by Nicole Wilson, followed by Aileen Campbell and Claire Badenhorst.