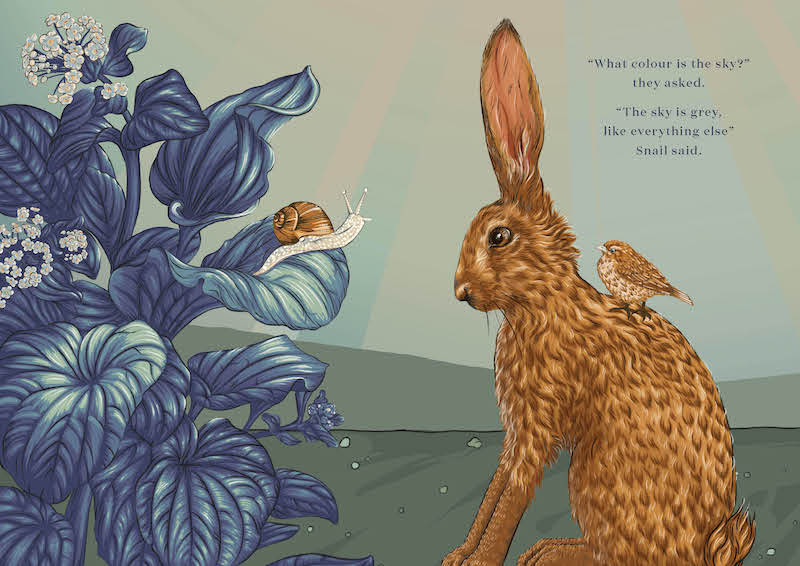 What Colour is the Sky? is the most recent children’s picture book published by award-winning Queenstown author Laura Shallcrass. QT Magazine spoke to her about the motivation behind the book.

Where did the inspiration come from for What Colour is the Sky?

The thematic inspiration for the book came from reading about group instinct and human evolution. I had been pondering the situation we have found ourselves in, the middle of a pandemic with more and more political division. I aimed to address that in a non-confrontational way which kids could relate to.

The book is aimed at three to eight-year-olds. I wanted to see if I could get across the idea that a different opinion isn’t automatically wrong but by the same token it doesn’t mean it’s automatically right. It’s all a matter of perspective and everyone has reasons for believing the things they do, accurate or not. I believe the only way forward is together and that begins with understanding.

What has been the response to the book so far?

It’s been great. I’ve had friends buy it for their friends, people tearing up when they read it because it really hits home for them in the situation they find themselves in 2022 and some amazing reactions from the kids I’ve had the privilege of reading it to.

When you are writing a book do you start with the illustrations or the text?

I start with a loose idea, develop the text and storyboards side by side then finalise the text as far as I can before moving on to producing the illustrated spreads. The entire process is very fluid and we are often making changes right up to the very end.

The illustrations are exceptionally beautiful. Do the characters themselves influence the finished artwork?

It took a long time to develop the first Hare so in a way all the illustrations are influenced by Hare. Frog was a bit of a surprise in this book but I really love the way those pages come out. The characters often surprise me, ones I thought would be a certain way come out differently for better or worse.

How does living and working within the Queenstown environment inform your work?

My illustrations are all about nature so I’m hugely influenced by the natural environment around me. The actual landscapes in my illustrations tend to be understated  but I love the smaller details, the way a dandelion grows or how light touches the trees and these are all details I pick up from the Central Otago landscape which inform my work.