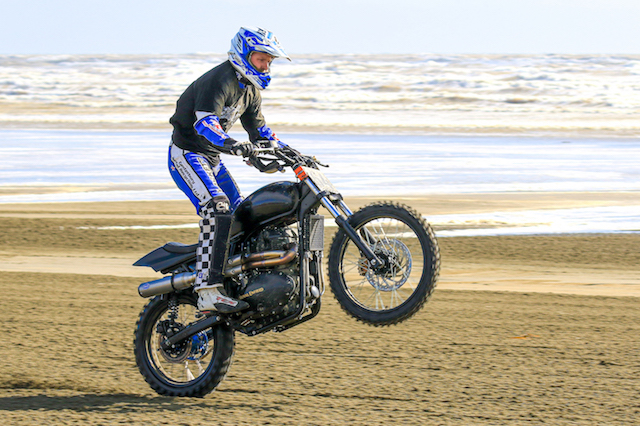 The team at Wanaka Powersports clearly enjoy life in the fast lane.

The business has accelerated so quickly since starting up less than two years ago it has already moved into its second state-of-the-art showroom at Wanaka’s Three Parks development.

As well as stocking some of the world’s most advanced motorbikes, specialist boats, power watercraft and outdoor equipment, the new showroom has a café and snack bar, an expanded range of exclusive branded clothing, gifts and gadgets plus a bigger workshop for customisations and repairs.

General manager Daniel Irwin says the company is always on the look out for new opportunities.

“We’ve just launched a concept dealership for Central Otago Honda cars and have also begun stocking motorised surfboards made by JetSurf in the Czech Republic – it’s an exciting new sport that’s perfect for our local lakes.”

“There aren’t many places where you can see a range as eclectic as ours all under one roof. Because we’re not based in a big city we promote ourselves as a destination store for the whole family where mums, dads and kids will all finding something to enjoy,” says Daniel. “People can drive down from Christchurch to test drive a motorbike, pick up a new wakeboard or biscuit for the lake, have a coffee and something to eat then head back home the same day.”

The Wanaka Powersports team are especially passionate about motorbikes. Daniel used to race motocross and Mitch Scammell, a member of the company’s sales team, competed at this year’s world-famous Burt Munro Challenge in Invercargill. He finished second in class riding an Indian while the Intertracker, a Royal Enfield Interceptor customised by Mitch and Daniel, finished third in class.

“We built the Intertracker right here in our workshop for an international competition organised by Royal Enfield last year. It won the people’s choice award and the company invited Mitch and I over to India for a tour of its factory which was amazing,” says Daniel.

He says in a short space of time the company has achieved a high profile.

“The New Zealand powersports community is a tight-knit bunch and word has quickly got around about our range and customer service. First and foremost we’re enthusiasts and I think that comes across when we talk to our customers. We love chatting about their particular passions and what we do as much as getting our hands dirty in the workshop out back.”