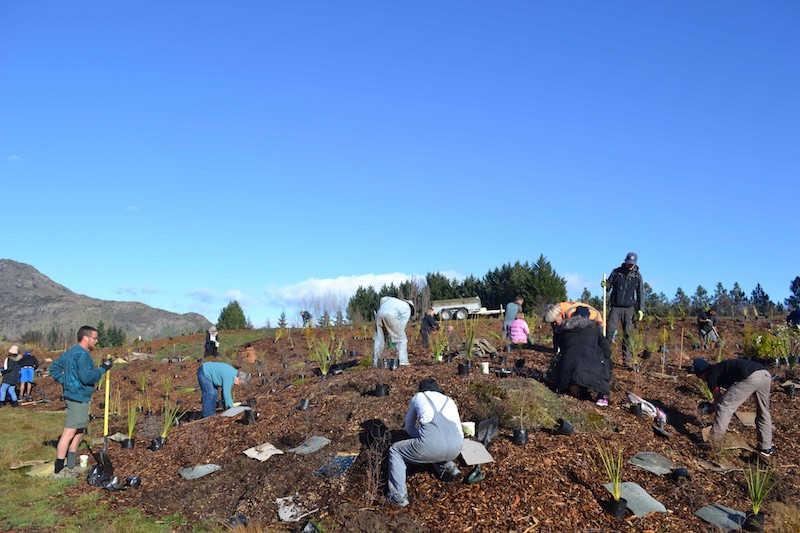 The Arrowtown Promotion and Business Association (APBA) is endorsing the work of local environmental groups who are driving change.

“In the past the Arrowtown environment has been modified by humans and while we have always championed heritage in this town we recognise that harm was done by gold miners sluicing out river beds, early settlers planting invasive exotic plants and the introduction of predator animals which decimated native birdlife,” says APBA manager Sue Patterson.

“To help restore the natural environment we are working closely with groups like the Arrowtown Wilding Group, the Wakatipu Reforestation Trust and the Predator Free Arrowtown in their efforts to make a difference. Government and community fundraising is vital for these groups to ensure their work can be effective.”

The Wakatipu Reforestation Trust is growing and planting native plants around the area to create wildlife corridors.

“Birdlife is starting to return and people are reporting wonderful morning bird call, and seeing Tui and Kaka,” says Sue. “The Predator Free trapping programme is playing a vital role in this by reducing pests and predators to encourage bird life.”

The Arrowtown Wilding Group has taken on the immense task of removing wilding pines and replanting a mix of non-invasive trees around Arrowtown and spokesperson Ben Teele says the project could not happen without community support.

“We had over 170 people turn up over several days to plant just under 2000 new plants at Whitechapel and nearly 1000 plants at Bush Creek. These volunteers are the unsung heroes of this community led programme.”

The group works in conjunction with The Arrowtown Choppers – a group of volunteers who remove wilding pines in their spare time.

“People taking time away from work and family to pull out seedlings and chop down trees in support of the control work being done by the National Wilding Conifer Control Programmeis significant and we can’t thank them enough,” says Ben.

“Arrowtown is a growing community and with the Arrowtown Wilding Strategy officially adopted in 2018 these programmes are set to continue for years to come with. Ongoing fundraising and community involvement are critical to ensure future generations don’t have to tackle the same problem.”